Agate is an extraordinary stone. The beauty of this unique stone is the beauty concealed. This beauty is brought out during the process of cutting and polishing the stone, which makes it shimmer with exceptional and unique colours and sparkle with multidimensional microcrystalline layers. I would say: it is a naturally occurring mineral, the banded form of chalcedony in other words of silicon dioxide. Agate is tinged with natural pigments and with quartz. It is incredibly difficult to put into words how it is possible that one small piece of mineral has caused so much delight and has charmed so many people through centuries and has been a passion of jewellers and the object of envy of so many women.

Since the beginnings of the culture formation, agate has been considered a particularly precious stone, which has an extraordinarily magical power. Agate was used by simple folk as a remedy for treating numerous diseases and ailments as well as by artisans of decorative arts. St. Adalbert Holy Grail is the most famous example of agate application, already in the Middle Ages. The golden age of this unusual stone falls between 16th and 18th century, the Baroque period.

The picture depicts an agate slab, which is now available at Fainner. We are in the process of filling the first order for our most demanding group of Customers. 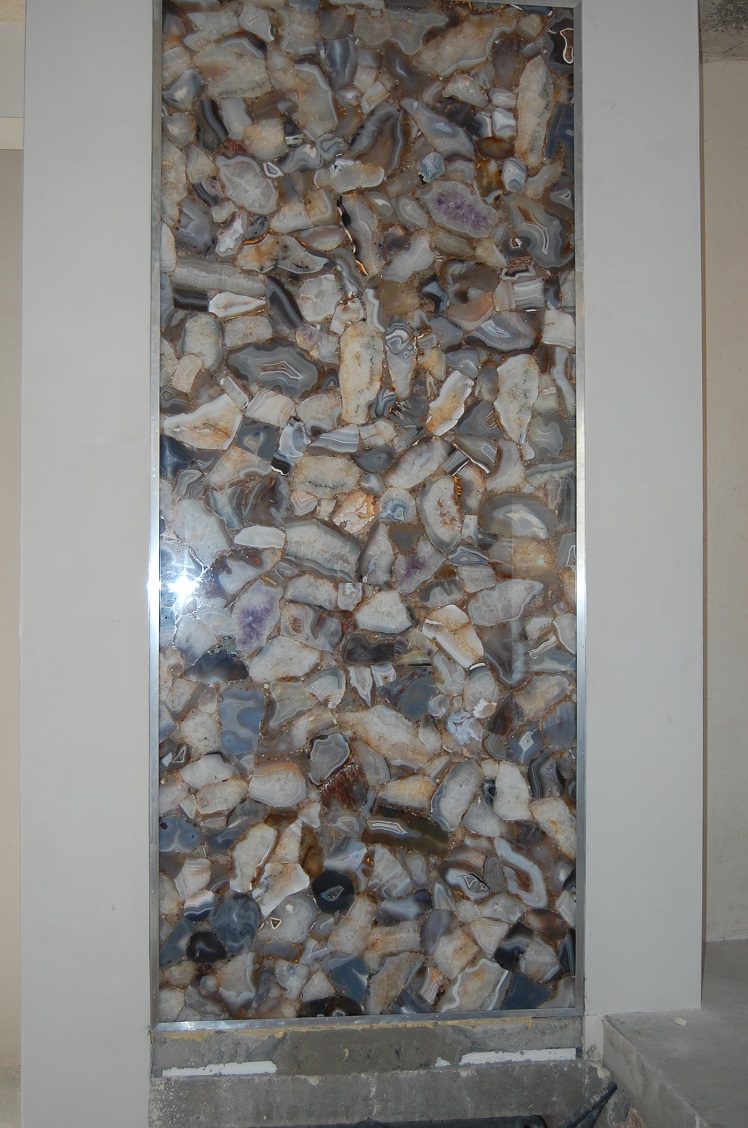 Both these types of stone are extremely popular in the construction sector and – needless to say – they are both beautiful. Anyone dreaming of an elegant interior finishing in a natural style has a tough decision to take. Therefore, we are lending you a helping hand and providing you with a short guidebook, which will show differences between marble and granite. We will take a closer look at their chemical composition, their durability and appearance. Enjoy your reading.

Stone is a natural material, which despite changing trends, holds a solid position in diverse arrangements styles. It is mainly used to make countertops, sills, stairs and flooring. How to pick out the stone appropriately to match specific interiors. You will soon find out in the following article.

Since time immemorial, natural stone has added elegance to every interior. Stone, a timeless classic, which will never go out of fashion. Stylish effect and high quality of stone enhance prestige in every space providing its owners with a touch of luxury. Staying in interiors embellished with natural stone enables you to enjoy not only its beauty but also its functionality, highest quality and easy maintenance.

If you take a decision to have a fireplace in your home, you are bombarded with plenty of alternatives offered by a market. There are a lot of solutions to choose from. However, the most important aspect is to select a fireplace which is characterised not only by its aesthetic values, but which is functional and indefectible as well. One of the most frequent dilemmas potential fireplace owners have to face is to decide on the best insert. The most popular types are the ones with the lift-up door and the with side-hinged door. Besides, there are inserts with a sliding door. Does the way we open the insert really matter?